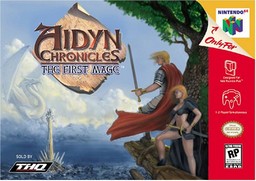 Aidyn Chronicles: The First Mage is a role-playing video game developed by H2O Interactive and published by THQ for the Nintendo 64 (N64) video game console.

Aidyn Chronicles: The First Mage follows a young squire named Alaron who, while searching for a missing farmer named Kendall, encounters a strange spirit and is poisoned by Goblins. He awakes from a terrifying vision of monsters to find himself inside the hut of Oriana, a healer, who tells Alaron that the poison is beyond the powers of normal medicine to cure. Upon returning to Castle Gwernia, the king, Phelan, instructs him to ask the Mirari people of Erromon to help heal his poison. Upon reaching Erromon, the Mirari King, Txomin, explains that they've been under attack from goblins and seeks Alaron's aid, promising to direct him to a naming wizard named Cradawgh.

Alaron clears the goblins off the mountains, however when he returns to Erromon he discovers that Txomin lied, and does not know the whereabouts of Cradawgh, telling Alaron instead to travel to Talewok, and see the sorceress, Ardra. Before leaving, Alaron converses with the Mirari queen Yeraza, who gives him the Stormbreaker, a blessed tree branch able to calm any storm.

At the Wizard School, the doorman asks everyone's True Name, but Alaron cannot answer. Ardra the sorceress begins the healing spell, which brings on another vision. This one includes a feeble, old man in a rocking chair. Ardra explains that the healing spell failed because Alaron is a Wildling – he has no True Name. Without a True Name, his spirit is not bound to his body, and Alaron is incomplete. Ardra tells him to travel to Port Saiid and take a boat to Cradawgh's Island.

Alaron is eventually able to hire a boat at Port Saiid – after an unusual encounter with a cryptic jester but the ship travels into a powerful storm, and as the Stormbreaker is tied to the mast instead of the helm, the ship is damaged and forced to land at Chaos Isle. Following repairs the party sets off for Cradawgh's Island; this time the ship arrives safely, however a group of monsters has already reached Cradawgh. The dying wizard asks Alaron to bring his body to Talewok, and suggests seeking the Jundar King Zaratas in the desert.

After Cradawgh's funeral in Talewok, Alaron heads down to the city of Terminor. He then soon discovers that the nearby village of Pome was destroyed by a wizard with a twisted staff. The final level of Terminor has a house, in which resides Mago, a wizard without a True Name, who went insane several years ago and called up a huge storm when the townspeople tried to kill him. Mago is the feeble, old man from Alaron's earlier vision and can no longer speak.

Alaron travels to a nearby bog, where he finds the Tower of Shamsuk, a powerful necromancer who had previously destroyed Pome and cursed Niesen, slowly turning him into a zombie. Niesen gets the party into the tower where they eventually reach a chamber with a large stone hand. The jester from Port Saiid appears once more, revealing himself to be Farris – a wizard. Farris joins the party, assisting them in defeating Shamsuk, who has already killed Oriana – now revealed to be Alaron's mother. Farris then leaves the party, taking Shamsuk's necromantic staff with him.

Alaron crosses a desert to reach the Jundar city of Ugarit, where he speaks with the Jundar Emperor, Zaratas, who explains that only the dragon Rooughah can name Alaron. He needs to find the Golden Horn of Kynon and play it for Rooughah. Alaron retrieves the Horn, and begins heading back to Erromon.

Alaron travels through the Erromon tunnels until he comes across the dragon Rooughah. After Alaron plays the Horn of Kynon, Rooughah tells him he knows his True Name: "Alaron". The Mirari then tell Alaron that the forces of Chaos are gathering outside Gwernia. Alaron returns to Gwernia castle and fights his way to Prince Sheridan, who confesses to always being jealous of Alaron. Sheridan explains that Alaron is the son of Oriana and King Phelan. Alaron fights and kills Sheridan, only to then meet Pochangarat (the leader of Chaos) – the huge monster from Alaron's first vision in Oriana's hut.

After Pochangarat's death, Alaron finds his father, King Phelan, who is dying from the wounds he suffered at Pochangarat's hands. He requests to be buried under the Great Wall of Knights in Gwernia, and appoints Alaron as his successor before dying. The story ends with Alaron's coronation ceremony.