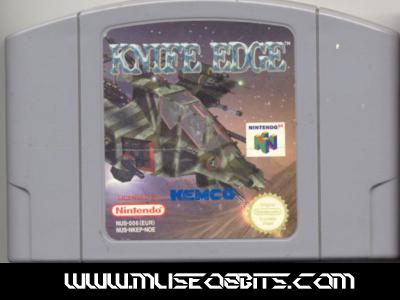 What is the purpose of the game? Not that it matters much but it is nice to know. You are a Gunner send to Mars to help the Colonists on Mars defending themselves against alien assault! You are given a experimental fighter.. doh... and you will have to keep yourselve alive in a furious battle for your fellow humans on Mars.

Jnife Edge is a first person arcade rail shooter. You cannot move yourselve through the level because the movements you make are in crontrol of the game itself. The most important thing you have to do is just shooting everything in sight!

A cool option is the mutliplayer... You can take the enmies with four players at once in one screen. Quite unique until now for the Nintendo 64 console, though a standard option for most arcade first person shooters. Not a cool option is the... No Save option. You have however unlimited continues but every time are defeated you have to start the level all over again.

One in all I think this is a great shooter game with a lot of action but with no puzzle solving or anything.. just a plain blow every thing up game. It has only six levels which you blast your way through quite easily.. I myself would not buy this game but rend it! But I'll leave this one up to you...