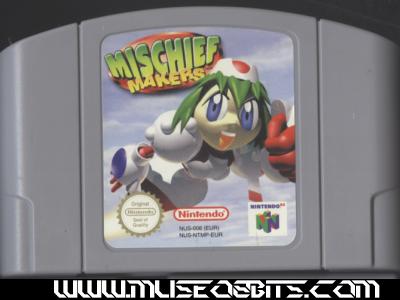 Classic platform action leaps onto the world's greatest gaming platform with Mischief Makers! Dazzling graphics, a great story and, best of all, a seemingly endless array of moves and areas marks Mischief Makers as a must-see for all action fans.

Mischief Makers chronicles the adventures of Marina Liteyears, an "Ultra-InterGalactic-Cybot G" who accompanies her inventor, Prof. Theo, from earth to research the mysterious Planet Clancer. When a gang of Clancers kidnaps the hapless prof, Marina sets off in hot pursuit.

Mischief Makers unfolds across five sprawling stages, each gorgeously rendered with a brilliant palette of colors. The lush surroundings of the tutorial stages soon give way to dusty desert, a volcano, a sinister fortress flooded with lava lakes, snowy mountains, twisting caves and more!

As she explores the Clancers' world, Marina gradually realizes that the stakes are far higher than the rescue of a single scientist. She finds herself drawn into a desperate bid by freedom-loving Clancers to battle sinister forces bent on conquering the planet.

Along the way, Marina encounters numerous friendly and not-so-friendly Clancers and finds herself called upon to rescue wayward Clancer children or battle one of the many weird beasts and bosses that seem to sprout from Clancer soil like wild mushrooms. There's even an Athletic Contest, complete with sprinting, jumping and a math contest!

Hard-core action fans will love Mischief Makers' breathtaking variety of moves. Marina runs, jumps, rides a menagerie of different animals and shoots weapons she's wrested from enemies. She can grab Clanballs floating in the air and ride them on gravity-defying tracks and pogo-stick on the spring-wound Jump Clancer. Her definitive move, though, is the grab-and-shake. Try this move on friends, enemies, innocent bystanders, or anyone or anything within arm's reach. You'll never cease to be amazed by what happens!

One of Marina's excursions knocks her out of action for a while. Stepping up to help is Teran, a little guy with a heart bigger than all outdoors. Teran can jump, punch, and ride a tricycle like Jeff Gordon handles a stock car. Despite his youth, Teran has a mysterious past that's not revealed until the game's final level. To solve that mystery, and many others, you'll have to collect a Gold Gem in each level.

With a fascinating array of moves, spectacular graphics, more than 50 levels, a compelling story and extremely attractive characters, Mischief Makers proves that the venerable side-scroller is more than ready for the next generation of gaming. Shake it up, baby!