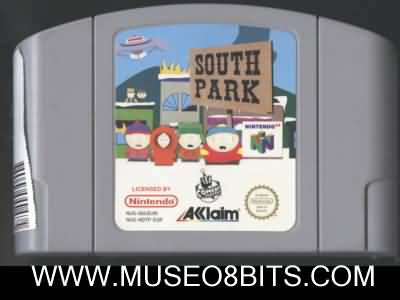 Nintendo.com proudly stands by the motto "All the (Nintendo) news that's fit to print," which is why you ain't gonna see too much coverage here of Acclaim's game based on the red-hot cable show. It's just, uh, not fitting for a happy, wholesome web site.

Like the show itself, South Park stars a gaggle of precocious third-graders whose language is, to put it mildly, a step or two beyond (or below) the Beaver's "Gee willikers!" If you're not comfortable with vulgar witticisms, crass sound effects and characters and situations that relentlessly push the bounds of good taste, you're duly warned to steer clear of this first-person shooter. Have we made ourselves clear?

Development house Iguana took great pains to get the look and sound of South Park just right. The game has the show's flat, student-animation-look down pat. When the action gets fast and furious, the game tends to drop frames, but overall, fans will be impressed.

The game's top draw, though, is the terrific sound track. The TV cast recorded hundreds of voice samples specifically for the game, which is one reason the Pak tips the scales at a Cartmanesque 128 megabits. Yep, that's series creator Trey Parker giving voice to Stan, Cartman, Mr. Garrison and more; fellow creator Matt Stone handling Kyle, Kenny, Pip and others; Isaac Hayes philosphizing as Chef; and Mary Kay Bergman doing distaff duties as Cartman's mother, Wendy Testaburger and others.

Special FX sounds are tightly integrated into the single-player mode's game play; for example, you'll hear the gobble-gobble of the marauding turkeys long before they attack.

But the voice samples really shine in the vs. multiplayer mode, where the characters hurl trademark one-liners (Mrs. Cartman: "No more Cheesy Poofs for you tonight!") along with snowballs. The music, which includes the TV theme song and plenty of cheesy organ riffs, is perfectly in tune with the game's high smirk-factor.

Compared to the vast levels of Iguana's Turok 2, South Park's single-player mode feels small and repetitive. Chef hilariously intros each stage, but out on the snow, the lack of objectives will dismay those seeking engrossing RPG-like play.

RPG-like play? Get real: South Park fans will buy this game in droves for the riotous mulitiplayer mode. You won't need to dis your friends: this game will do it for you!