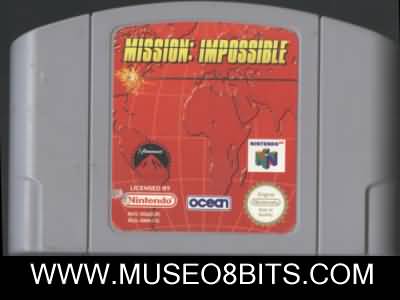 Ocean could have played it safe with a pricey license from the hit movie of two summers ago, churning out another pallid Doom clone in which your main goal is to blow away anything that moves. Instead, Mission: Impossible for the N64 turns out to be an engrossing spy sim. Despite some shortcomings -- most notably, the lack of a multiplayer mode -- Mission: Impossible should intrigue all but the most trigger-happy players.

While you'll mostly explore stages and try to figure out what to do next without being caught, Ocean mixed in other varieties of game play, including a tense escape from CIA headquarters. Fans of firepower need not worry: you'll get the chance to blast away with some mighty big cannons on a gunboat. Add the extensive cut scenes and you have the most cinematic game since GoldenEye 007. Indeed, Mission: Impossible producer Arthur Houtman cites master directors Alfred Hitchcock and Orson Welles as key influences on the game's look, feel and tense atmospherics.

After extensive early input from Paramount, the studio behind the Mission: Impossible movie, Ocean's developers in the United States and France were left largely on their own. The result is a game that roughly follows the plotline of the movie, but with plenty of surprising twists and turns, including extensive all-new missions at a snowbound submarine pen in the North Seas. Although you'll primarily control Tom Cruise's character, Ethan Hunt, you'll find yourself heavily reliant on fellow IMFers for info, gadgets and quick getaways.

Graphically the game is solid, with nicely detailed textures and realistic animations, although some of the characters in the cut-scenes suffer from low polygon counts. The game's real technical excellence, though, lies in the sound engineering, which includes an astounding amount of voice in the famous "Good morning, Mr. Phelps" briefings.

Project manager Benoit Arribart says the sound compression was done completely with Nintendo-provided tools, although the development team took great care to make sure the voice samples were extremely high quality before compressing them. Ocean did a great job with the music, too. That terrific Lalo Schifrin theme is here in myriad variations, all of which were arranged and performed by stateside musicians.

Play control is solid, if unspectacular. Scrolling through your weapons and items takes some getting used to; however, the game's deliberate pace means you'll seldom have to rush your selection. Jumping is inexact, but since this isn't Super Mario 64, that's not a big problem.

Mission: Impossible lacks a multiplayer mode, but you can play it again on the Impossible Mission setting, which gives you extra objectives and sharper enemy AI. However, there's little challenge once you figure out all the puzzles.

Seemingly in development almost since the end of the Cold War, Mission: Impossible comes out of deep cover as a white-knuckle thriller. Players who put a premium on suspense will agree that the game was well worth the wait.