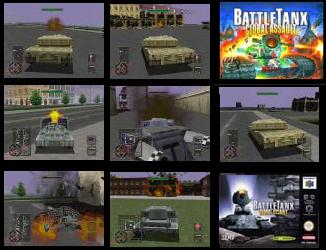 Griffin and Madison got together in the first game, but they're not living happily ever after.

3DO -- the company notorious for crushing all things cute and cuddly -- has nearly completed work on an explosive sequel to last year's sleeper hit. We nervously hid away our adorable stuffed Pokémon dolls before their arrival, and then entered the volatile landscape of post-apocalyptic Earth.

The first BattleTanx had a solid single-player mode, but its exciting multiplayer action is what impressed gamers the most. In case you missed the first BattleTanx, here's a brief summary: A nuclear war blows up the world. The few remaining women are worshipped as QueenLords and protected by gangs of men. Griffin Spade is separated from Madison -- his true love -- and battles across the country destroying tanks and capturing QueenLords. Interesting plot, but basically just an excuse to blow stuff up.

Things have taken a turn for the worse in BattleTanx Global Assault, as an evil QueenLord named Cassandra plans to kidnap Griffin and Madison's son to exploit his rare telekinetic talents. This is nothing more than another excuse to blow stuff up, but this time around the action takes place in real cities around the globe with authentic landmarks to destroy. In all there are 22 new levels in BattleTanx Global Assault, including high-profile locations like Washington D.C., Paris, London and Berlin.

Compared to its predecessor, the graphics in Global Assault have greatly improved. Background graphics are more varied from level to level, and the tanks are much more crisp and realistic. Explosions are impressively dramatic, with slick fire effects and clouds of smoke.

After you destroy an enemy tank or a building, flaming debris rains down in all directions. The single-player game runs at a respectable 30 frames per second, only dropping 10 frames per second during four-player action. Heavy fog can be distracting in wide-open battlefields, but most of the action takes place with a lot of buildings around to hide this effect.

In the original BattleTanx, play control was solid but not perfect. It could be difficult to turn the tank around, and things became especially hairy when trying to drive in tight spaces. These problems have been remedied in Global Assault, with more responsive tank control and the ability to take turns more tightly.

As you guide your tank around tight corners, the turret turns in the correct direction before the treads. As a result, you're free to unload on your enemies even before the tank has completely turned the corner. In addition, 3D0 has included two camera angels to accommodate the destructive styles of different drivers.

There are 12 different types of tanks to choose from, including nine new vehicles not found in the original game. A massive Rhino Tank is heavily armored and sluggish, while a number of smaller tanks are vulnerable to attack but lightning fast. One heavily-treaded tank is equipped with strafing rockets which allow it to roll from one side to the other.

Perhaps the coolest tank to make the cut is the Hover Tank, which smoothly glides over any type of terrain. Since it has no treads connecting it to the ground, the Hover Tank recoils each time it fires a shell.

Before each mission, players choose which tank to purchase. Tank Cash is scattered throughout the battlefields, and when you run out of bread your mission is over. The best tanks are the most pricey, of course, and a large part of the strategy in Global Assault is choosing the right tank for the job.

There's no shortage of city-shredding weapons at your disposal, which include laser beams, swarmer missiles, mines, turbo boosts, nuclear weapons and guided missiles complete with nose-cams. One innovative defensive device is a special warp that teleports your tank to a random location, in an acknowledged nod to the last resort warp button found in Asteroids.

Global Assault features eight different modes of play, seven of which are designed specifically for multiplayer mayhem. If your friends happen to be too busy for a BattleTanx session, 3D0 has included computer-controlled bots to compete against you in any of the multiplayer modes. This provides great replay value for maverick players who have already proven themselves in the campaign mode.